A Deep Connection to Place

Dakota and Ojibwe peoples’ relationship with their homelands is rooted in cultural history and spirituality, including a powerful sense that they are related to everything that surrounds them. The Dakota express this as mitakuye owasin, “all my relatives.” This profound connection with their land includes a responsibility to maintain balance by caring and providing for one another. Throughout history, this connection established a Native nation’s sovereignty in their territory.

Many Dakota trace their origins to the junction of the Minnesota and Mississippi rivers, the area near present-day Minneapolis–St. Paul. The region surrounding the confluence of the rivers, including the Falls of St. Anthony, is sacred to many Dakota as a place of their emergence into the world. In the Dakota language, this place is called Bdote, “where the two waters come together.” The word “Bdote” is familiar to many Minnesotans in its English version, “Mendota.” 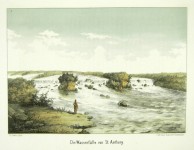 Some Ojibwe oral traditions tell of a great westward migration from the Atlantic Ocean, down the St.  Lawrence River, and through the Great Lakes in search of a prophesied place “where food grows on the water.” The quest led them to northern Minnesota, where the Ojibwe found abundant wild rice growing in shallow lakes and waterways. 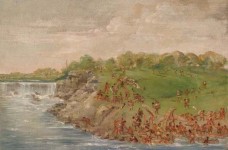 Dakota and Ojibwe people understood the need to have a place to feel secure, have access to food, and visit sacred sites. For the tribes, territory was not about money or property. It was about tradition—about maintaining a way of life and a place called home.

This map shows Dakota and Ojibwe lands in the future state of Minnesota circa 1768. Dakota villages are shown at left as “Naudowessie Country” and Ojibwe (who have also been known as the Chippewa) villages are located at right center as “The Chippeway Territories.” 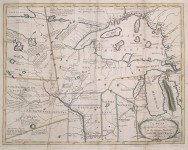